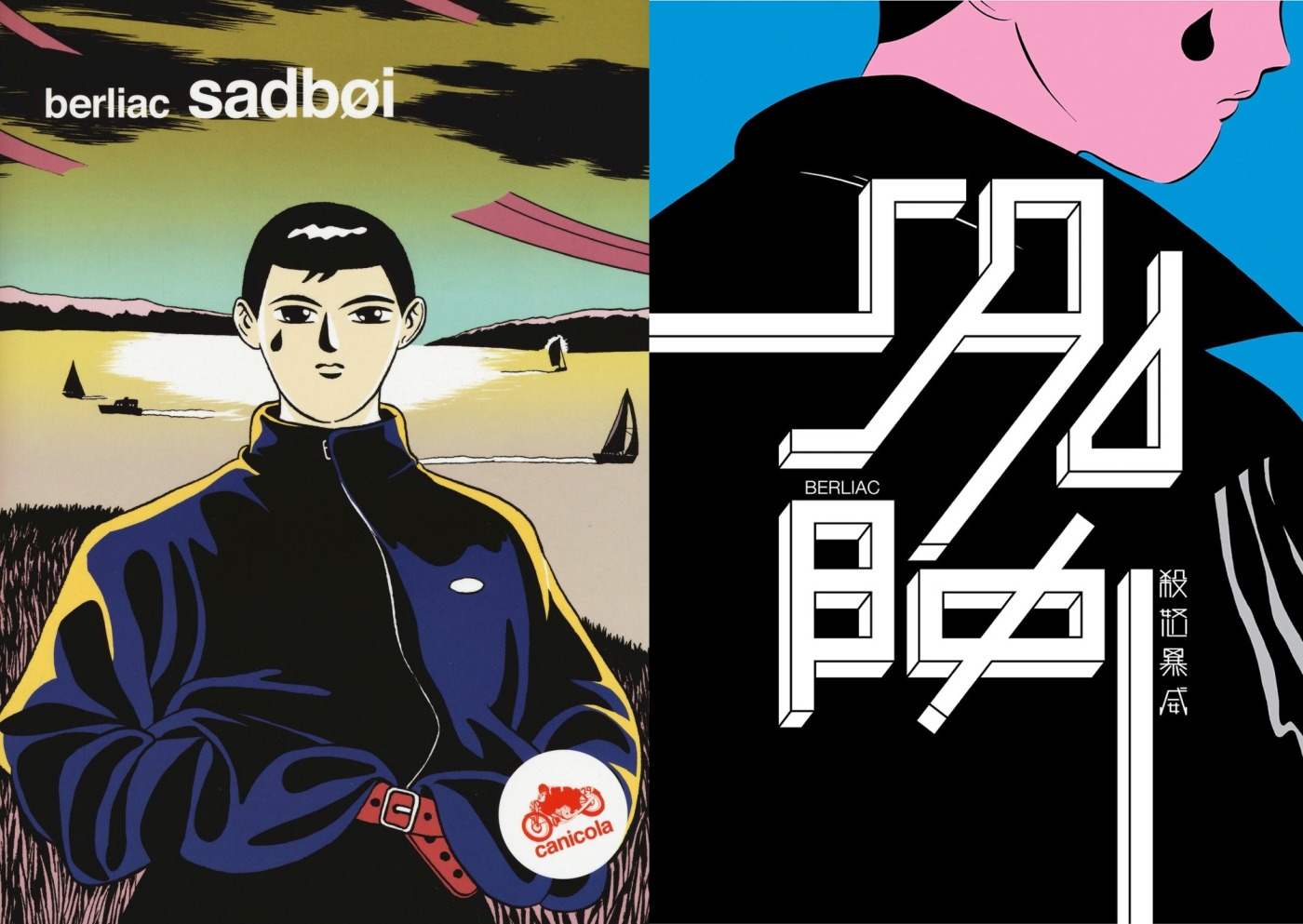 Short disclaimer: some of these thoughts were penned down in mid-2016, when I reviewed Berliac’s Desolation.Exe, then a small zine gathering multiple material, which the author republished later in book format, with my text as a preface.

This a book that conflates a significant number of themes, all of which are considerable in terms of some call “relevance,” almost in a programmatic manner. A comic book that concatenates its elements, tempers them in a hotly fashioned object, and then brandishes it in a weaponized manner.

Sadbøi thematizes issues of emigration and integration, multiculturalism and prejudice, solidarity and selfishness, abnegation and sanctimoniousness. It also brings to the table crime, youth culture, issues of sexual identity, and high-end conceptual art and its marketability. At the superficial level, this is a well-structured Bildungsroman around a young man called Sadbøi, a refugee immigrant from an undisclosed country, separated from his mother when he arrived by boat in Europe. He was to be taken to a Scandinavian country, and after some time in a social institution, would be adopted by a loving, bourgeois couple, and started his integration in that society. His role as an outsider, however, would never be forgotten, either by his own traumas and past experiences or by all the others that addressed him. Slowly but surely, his alienation, engulfed in the already troubling teenage years, lead him towards a life of cheap thrills via petty crime. Almost schematically, he becomes involved with bigger crimes until, no longer a minor, he is arrested for real. In prison he becomes acquainted with a art marchand who shapes Sadbøi into a new sensationalist phenomenon in the artworld: can crime be art? 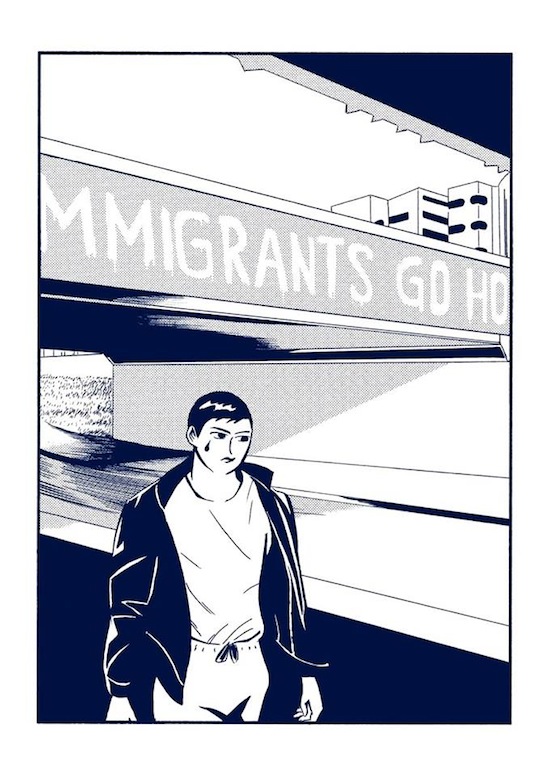 The story actually starts the night Sadbøi is about to present his debut performance at the Museum of Contemporary Art. From there, we go back and forth in time in a complicated, overlapping manner in order to reconstruct this neat and duller synopsis I just presented above.

“Sadbøi” is a name that avoids any kind of ethnic marker, or so it may seem. Sadbøi traversed a body of water in a type of rafter, which became a traumatic event, bearing all the traces of such a psychological wound, returning, expanding as a debilitating obstacle even at moments when one outside would think he was in control of his emotions and will. But we are damn too close to the horrendous experiences that thousands of people have been experiencing in the Mediterranean, trying to reach the shores of Fortress Europe, to discount an association with it that contemporary reality. Nevertheless, the figuration of the protagonist seems indeed closer to a nondescript Japanese shonen manga youth than to anything else (a point of contention in some of the controversis that the author has been associated with). The names of the rest of the characters, however, are loaded with specific nationality markers. His best crime buddies, who he met while in prison, are called Emir and Darko, the combination of which reminds one of Muslim Croatians. So there’s a lot to unpack politically in this book, and most of the lessons are hurtful to a complicit society with the suffering of people whose “markers” will always paint them as outsiders. The double standard is clear and it’s thematized throughout.

Berliac’s early work was stylistically very different from what he is doing now. The first work I read from him was the 2013 Playground, a wonderfully complex and layered essay of a comic that discussed Cassavettes, and comics-making. The Argentinian author began then to draw under the heavy influence of a very specific corpora of Japanese comics, gekiga. These are the “dramatic images,” as dubbed by Tatsumi Yoshihiro, back in the 1960s, when a group of artists were trying to bring more serious, adult themes and contemporary realism to the medium of comics, by then almost solely dedicated to either children’s humor or adventure (if they managed to do so is an entirely different subject, and perhaps Ng Suat Tong hit the nail in the head in his assessment of the materials that have been available in English, some time ago). If there are many, many authors influenced heavily by manga, and in the most diverse manner, from Bryan Lee O’Malley and Tillie Walden, Berliac walks a fine line between fine arts-style appropriation and full-on commitment to the creation of a negotiated space of meeting between “classic manga” and what I believe to be an incredibly array of authorial comics in the Argentinian scene, and beyond (considering Berliac has vivid dialogs and collaborations a little all over the world, from Brazil to Germany).

However, Berliac choices are pretty specific. His page composition, with very simple grids and dramatic exceptions, a very stylized figuration, sometimes extremely so, transitions and ambiance, and its social-imbued themes, and even a judicious use of onomatopoeia, are reminiscent of a very coherent constellation of artists from the 1960s and 1970s. I am thinking of the so-called “1-2-3” group, made up by Shin’ichi Abe, Oji Suzuki, and Masuzou Furukawa, but also Yoshiharu Tsuge and Seiichi Hayashi. This does not mean that there are no affinities with contemporary artists. The incredibly stylization, for instance, in which each character seems to come from a completely different graphic family, reminds me of Yuchi Yokoyama, clearly an influence as well, even if oblique. In any case, Berliac’s choice of rhetorical and stylistic appropriations follows some of the archival trends of contemporary practices of comics-making, involving the creation of a private tradition/canon, a self-inscription within that same field, a repurposing of the political power of those source-texts into a new context, not to mention a ready-made shorthand for certain effects. In the present case, a melancholy despondency on life, a dismal view towards the balanced acceptance of otherness, a raga against the fury of partiality, especially from those who purportedly represent a progressive view of society and are, in fact, unable to check their own privileges and Weltanschauung.

Sadboi is not, at all, a subtle piece of work. It is a blunt instrument, almost a ham-fisted attempt a creating a novel pushing these topics. But is that such a bad thing in itself? Whatever angle you may want to address, it will always elicit passionate appraisals or rebuttals. One may defend the need to integrate as best as possible refugees and immigrants, but to which extent is erasing their own cultural traces acceptable? What is the degree of adaptation that one may ask? Some will say that even asking for such a change is already a violent oppression, while others will claim that such is the price to pay to maintain the cultural identity and political cohesion of the receiving country. Negotiation is always extant, but that very tension is painful. Sadboi does not present us with much context or essayistic snippets that would help us map out concrete troubles and experiences, in Scandinavia or elsewhere (especially in Europe, but there are many other places of tension, conflict and negotiation). It creates a clear-cut enraged perspective of one boy against everything around him.

Sometimes, bluntness is welcome. It might just wake us up from complacency.

A thank you note to the artist for sending me a copy of the book. [images pilfered from the interwebs]

On comics, imagetexts and close cousins. English-language blog by a non-native English speaker (so forgive me misplaced prepositions).